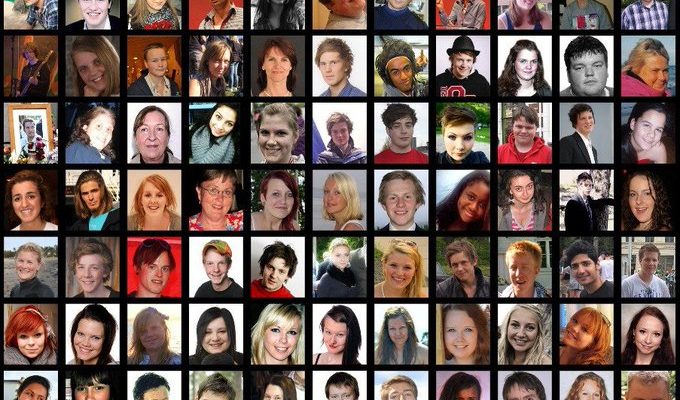 Receptionist in the security department of the Government Administration Services. She was described as a “good colleague”.

Secretary with the electricians and information technology workers’ union. On her way to subway station when bomb exploded.

Owned a bar and restaurant in Oslo. A colleague described his death as “a great loss”.

A lawyer who worked in the justice department. He was described as “socially engaged”.

Originally from Grue, Hedmark county, Ida worked as an adviser to the ministry of justice. She was described as “a dear and highly-valued employee”.

A senior government worker originally from Tyristrand, Buskerud county. Colleagues said she “represented the best in us”.

Senior consultant to Norway’s PM Jens Stoltenberg’s office. Officials sent their “warmest thoughts and sympathy” to her family and friends.

Worked on international issues in Justice Department. Colleagues said they had lost a “dear and highly valued employee”.

The committed young politician was described as “a well-loved friend, who was socially engaged and interested in multicultural issues”.

Student at Greve Forest High School who was interested in music, dance and drama. Described as a wonderful, conscientious girl who was a “ray of sunshine”.

Better known as Isma Brown after appearing on a talent show. The dance instructor was described as a “very bubbly, happy, caring and happy boy. He was very positive with a very big heart.”

An active blogger, Ronja had a keen interest in music. Friends said she was “a person with courage, commitment and kindness”.

A student council representative. Described by friends as “a boy who spread joy”.

Described as a gentle but committed person. He was said to have been heavily involved in efforts to get a new sports hall in his village.

Known as Pamela. She was described as talented, super-intelligent, politically active and down to earth.

The student council leader was described as an “active and versatile girl”.

Daughter of the city council politician Lola Awoyemi. Described as a kind and open girl, who was active in AUF discussions.

The student politician is believed to have been one of the first shot on the island. His family described him as a “bubbly” boy with a keen interest in music.

Her head teacher described her as an excellent, beautiful youth, who was sociable, interested in international issues. She had planned to start a summer job as a journalist.

An active young politician and leader of the AUF in his area. He was said to be “full of initiative” with “a great desire to work in politics”.

Active in Askoey AUF and was involved in local politics as well as being a member of the youth council.

A board member of the Halden AUF. Described as “the sweetest person in the world”.

Crown Princess of Norway’s step-brother. The royal court said the off-duty police officer was killed while working as a security guard on the island.

Regional secretary of Labour party’s youth wing. Father described him as a “calm, big teddy bear with lots of humour and lots of love”.

Union official concerned about justice, equality and community thinking. Described as a well-liked young man who fought for pupils and students’ rights. Was training to be a nurse.

Secretary of the international committee of the Young Socialists of Georgia.

Son of former political adviser. His father said he was a boy “full of humour” who loved playing the guitar.

She was described as an active politician who was well liked.

PM Jens Stoltenberg said: “To many of us, she was the embodiment of Utoeya. And now she is dead. Shot and killed whilst taking care of and giving joy to young people.”

The student with an interest in politics was described as “a gentle boy who stood up for his friends”.

Friends and family said she was “kind, caring, gentle and positive. She loved life and spread joy to everyone around her”.

Said to be a big fan of Chelsea football team and described as “very warm, friendly and socially engaged”.

“An independent boy with a good sense of humour,” his parents told NRK. He was interested in dogs, hunting, snowmobiling and took an active part in the youth community.

Described by friends as “always happy, positive, and without prejudice”.

Teachers described her as a wonderful girl who was “open and cheerful”.

Music student at Heimdal high school and member of Byasen school marching band. Described as a role model for others in the band.

Had large network of friends through music scene and politics. Described as a dedicated person who put 100% into everything he was interested in.

A sports lover described as modest and liked by all who knew him.

Active in Sund AUF, she was described by friends as a unique and bubbly girl.

Vice president of Nesodden AUF. He was the youngest member of editorial staff working on the organisation’s magazine.

Described as a clever student who contributed to the cohesion of her class. Elected as central member of local AUF a month before the tragedy.

Leader of Porsanger AUF. Described as a “breath of fresh air” in the local community. A Labour colleague said he was very engaged and engaging.

Director of Sarpsborg AUF and active in in the Labour youth league regional committee in Oestfold. Described as “a very caring and confident person”.

Known as Christopher. Long-term member of the AUF and was elected to the board in October. Described as a skilled orator and a charismatic young politician.

PM Jens Stoltenberg described him as “one of our most talented young politicians”.

Originally from Iraq, Karar was with friends at summer camp when he was killed. The local mayor described his death as “an enormous tragedy”.

Had a summer job at the justice ministry before attending camp. He was secretary of Moss Regional Labour Youth, who said they had lost a caring, open and inclusive boy.

Leader of Nesodden AUF. She was said to have dedicated her life to fighting for democracy and against racism.

Described as socially-engaged as well as “impulsive and passionate”.

Treasurer of Hadsel AUF. Said to be a very committed person, both in politics and culture.

Described as a politically-engaged girl who was keen to take care of the weakest.

A student described by friends as a “funny girl, who always had something to offer: opinions about politics and love and fun and witty comments”.

Danish government confirmed the Danish national was killed while working on the island as a first aid assistant. She was with her 20-year-old daughter, who survived the shooting.

A keen student described as happy and funny as well as determined.

Student politician described as a “wonderful girl who had much to contribute”.

The student politician was said to be a natural leader. Those who knew him described him as trusting and kind, and a person who showed great concern for others.

The nursing student was the local AUF county chairman. Described as energetic with great commitment.

The student was described as a quiet girl who always stood up for those who needed her. Her father said she was concerned with injustice in the world.

His father had exchanged text messages with him before the shooting. His father told NRK that public support had helped at a painful, terrible time.

Described by friends as “a great person” whom it was “an honour” to have known.

Painter and union man. He was a board member of the Joint Association’s Central Youth Committee. Described as a “kind, quiet and generous man”.

Leader of the AUF in Fredrikstad. Described as a “very happy and social girl who committed herself to what she believed in”.

Worked as a security guard on the island of Utoeya.

Politicians from her local area said hearing news of her death was “a difficult day”.

An active and determined politician, the young student’s family said she was inspired by Ghandi and wanted to make the world a “better place”.

An enthusiastic member of the AUF who saw her future involved in politics.

A student who said she loved going to school.

Active in Askoey AUF and played in school band. Classmates described her as a happy girl who lit up the school day and every day.

A member of the Rana AUF, she spoke to her mother during the shooting. She had urged her daughter to hang up and hide.

The oldest of three siblings, she was said to be looking forward to the youth camp.

Eivind was involved in his local youth centre and was attending his first summer camp. Described as an “amazing guy, always happy, caring and helpful”.

Described as “very talented and engaged” and a person who participated actively in political debates.

Originally from Iraq, Jamil was described as happy, attentive and curious with a strong desire to contribute.

Known as Sissi to friends and family, the schoolgirl was described as a “beautiful, caring and vibrant girl”.

A keen member of the AUF. The mayor of Alta described him as “a flower that would have grown big and strong”.

Elected leader of Oslo Labour Youth in February. Friends said he was “ambitious and fearless”.

Had recently become head of Bodoe AUF. His best friend said he was someone who could “light up the darkest days”.